In the northern part of the Almirós plain the huge Aïdiniotikí Magoúla, although partly damaged,  is still an impressive monument of the Bronze Age. Except for a settlement in the Voulokalíva area Bronze Age sites are relatively scarce in the Almirós plain. The site in the Voulokalíva dates to the transition of the Late Neolithic to the Early Bronze Age (ca. 3300 BC), but was also inhabited during the Middle and Late Bronze Age. 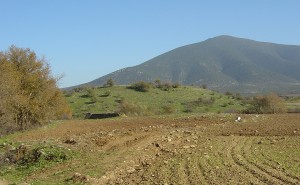 In the Soúrpi plain, no less than three Middle Bronze Age sites are known: Magoúla Soúrpi, a settlement on Kastroúli hill and Magoúla Pavlína. Magoúla Soúrpi is nicely situated on a spur of the mountain range to the south of the Soúrpi plain. River Salambriás flows along the site and from the magoúla one overlooks the whole plain. The second site is strategically situated on Kastroúli promontory close to the Xeniás monastery.

The site at Magoúla Pavlína is of a totally different character. It is situated at a slight elevation of the alluvial slope in the estuarine area. In the Middle Bronze Age the site was close to open water, but nowadays it is surrounded by a back swamp at all sides. A survey was conducted in 1996, shortly after the first time that the plot was ploughed. A huge amount of artefacts lay at the surface that year: fragments of ceramics, grinding stones, bones etc. The finds point to habitation in the Middle Bronze Age (2200-1500 BC).