An impressive 4.7 km long enceinte, fortified with at least 120 towers, surrounded the lower and upper town of Halos. Two gates of the courtyard type, the Northwest Gate and the Southeast Gate, and some smaller gates gave access to the lower town. The South Gate, also a courtyard gate, provided access to the city’s upper town. We presume that two ‘hypothetical’ gates – East Gate and West Gate – were situated at either end of the east-west running Main Avenue, the central axis of the lower town. The West Gate, nowadays covered by the National Road, connected the city’s upper and lower town. Since 1976 three major gates have been excavated, as well as the Akropolis Gate and a minor gate in the city’s southern wall.

In the period 1995-2006 the investigation of Halos focused on the excavation of the city’s Southeast Gate, which after the earthquake of around 265 BC was found to have been reoccupied as a farmstead or indeed a manor, until about 220 BC. The Southeast Gate gave access from the south to the lower town. It is a so-called ‘courtyard gate’, with two towers at the front, two side walls, a courtyard and two pairs of spur walls at the rear. 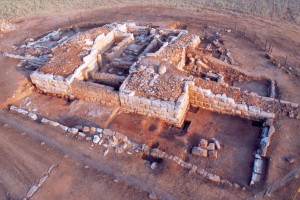 The front of the gate consists of two rectangular towers on either side of an opening 6.78 m wide. The western tower covers a slightly larger area, measuring 6.85 m x 6.06 m compared to the eastern tower’s 6.74 m x 6.11 m. The total frontage of the gateway, including the two towers and the opening is therefore 20.37 m. The towers are aligned with the city wall on their rear side with the result that they each project some 3 m out into the plain. 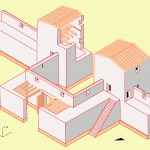 Remains of the South Gate came to light during the 1998-2000 excavations by the 13th Ephorate of Prehistoric and Classical Antiquities at Vólos along the National road. The gave acces from the south to the upper town and was like the Southeast and Northwest Gates of the courtyard type.

With exception of one row of blocks at the eastern tower and of blocks of the eastern side wall of the courtyard no limestone blocks of the superstructure of the gate had been preserved. Foundation blocks was all what remained of the west tower, the spur-walls and the western flank

The cleaning and partial excavation of the Northwest Gate in 1982 revealed the existence of an asymmetrical courtyard gate. This gate gave access from the north to the lower town. The east side of the gateway is flanked by a tower of which the front wall has disappeared. Only the two corner stones, with drafted edges, have been preserved. The distance from corner to corner is 6.70 m. The western flank of the tower, the side wall projecting inward and the eastern pair of spur walls have unfortunately been cut off by a road cunette. The dimensions of the eastern tower were probably 6.75 x 6 m. 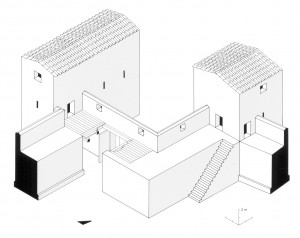 The west side of the passageway and courtyard was flanked by a 12.20 m long and 4.60 m wide tower. Partition walls divide the western tower into three compartments of about 4.60 x 3.20 m. One of these walls continue beyond the tower wall to form a spur wall which protrudes 3.30 m. A second spur wall lies in line with the southern wall of the tower and closes off the curtain wall. This spur wall is also approximately 3.30 m long and 0.7 m wide. The stones of the spur wall are larger than the facing blocks of the towers and the town wall.

At right angles to the last stone of the spur wall was a threshold stone, which appeared to be 1.50 m long and 0.5 m wide. The top surface consists of two levels, the far end being 0.11 m lower than the front. A rectangular hole had been made in the thicker part – 0.42 m long, 0.29 m wide and 0.07 m deep –  for the tenon of the wooden doorpost which protected the pivot of the gate door. There was a smaller hole in the back part with dimensions of 0.18 x 0.18 m and a depth of 0.035 m. The gate’s pivot turned in this hole, probably in a bronze insert, like that which was found in the threshold stone in the Akropolis Gate.

The width of the passage is 1.64 m on the outside and 1.83 m on the inside, which is rather narrow for a small gateway and perhaps a little wide for a postern. A postern was generally wide enough to allow one man to pass through at a time. Due to the bossing, the actual passageway must have been narrower still. 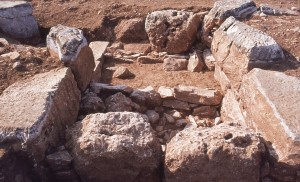 Despite the lack of evidence of a gateway or a passageway which could be closed, we nevertheless suspect that there must have been some kind of construction to close the entrance. The main reason for this is that, in general, the positions of posterns were chosen rather arbitrarily, whereas these minor gateways lie in line with the main streets. Hellenistic posterns were commonly built for the express purpose of making sorties, and might, therefore, be sited regardless of the routes of communication. Consequently, we assume that the minor gateways of Halos were built as a means of connnecting the avenues and the area outside the town-wall, and not as posterns specially intended for sorties. However, this does not mean that they could not be used as such in the event of an attack.

It is assumed that there was another gate in the West wall of the lower town, in line with the Main Avenue, connecting the two parts of the city: lower town and upper town.

This hypothetical West Gate was most probably a simple opening in the course of the wall. There will have been no need for an elaborate courtyard gate for defensive reasons at this point, because the West wall was only a second line of defense. If there had been two towers set close together, Stählin would undoubtedly have mentioned them, considering how well preserved the foundations of the towers of the West wall were. There was moreover no room for a large gate with two towers, a courtyard and spur walls, because the housing blocks extended to a ‘wall street’ along the western wall.

Finding evidence for this presumed Central Gate will not be an easy task, because unfortunately the site where the gate will most likely have been situated now lies buried beneath the national road Athens-Thessaloniki, remains of the old junctions on either side and a lot of rubble.

The lower course of river Amphrysos may well have been navigable in Hellenistic times. Coin finds and ceramics recovered in the excavation of the houses suggest that New Halos had overseas contacts, with for instance cities on Euboia and in Lokris. May we assume there was also a gate in the East wall, providing access to a landing place along the river?

It is likely that there was a East Gate in line with The Main Avenue. Unfortunately the entire eastern wall was destroyed either in the 1830s or in the Byzantine period, but a few foundation stones were visible in a gutter dug for irrigation purposes when we surveyed the site of the wall in 1977. Perhaps we will one day have an opportunity to search for foundations of this presumed East Gate, which may also have been of the courtyard type.

The Akropolis Gate is a good example of a simple opening in the line of the wall on the understanding that the leaves of the gate that closed the entrance were flush with the outer face of the wall. The passageway was flanked by tower 95 on the left, at a distance of 4.5 m. The sides of the gateway consist of two stones, set perpendicular to the wall. The top surface of these stones had been carefully finished. The width of the passage, between the finished face of the side, is 2.50 m. The actual width varies from 2.35 to 2.40 m, due to the slightly bossed surface of the stones. 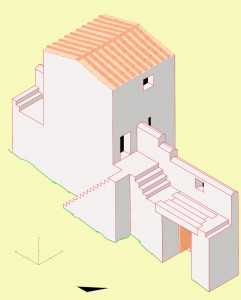 The gateway’s threshold consisted of five stones which were not founded upon solid rock. At either end lay a stone with sockets. Between those two stones lay three more, the middle one of which lay somewhat higher than the others. The threshold stones at the sides of the passageway provided information about the structure of the gate. The length of the stones was 0.71 m, the width 0.35 m, their thickness being 0.48 m. The top surface of the stones had two levels, the back being 0.05 m lower than the front. The higher surface had two rectangular sockets: 0.26 m long, 0.07 m wide and 0.05-0.055 m deep. In the lower, back end there was a rectangular hole: 0.15 m.

Bronze inserts were found in the threshold stones of the Akropolis Gate. The measurements of the bronze plates vary little, the largest being 0.125 x 0.125 m and the smallest 0.11 x 0.11 m, with an average thickness of 0.012  m. In the middle there is a circular depression with a diameter of 0.084 m, in which the bottom end of the pivot turned. The pivots themselves probably had a somewhat larger diameter, for around the circular hole a groove caused by wear is visible, with a diameter of 0.102 m. Between the pivots a 1.90 m wide gap remained in the passageway.

Connection between upper town and akropolis