A 4.7 km long circuit wall, fortified with at least 120 towers, surrounded the lower and upper town of New Halos. The curtains in between the towers consist of two faces of limestone blocks and a rubble core. The top and bottom faces of the trapezoidal facing blocks run parallel, while one of the sides is often vertical and the other slanting. The stones were laid in courses and as a rule the facing blocks were placed lengthwise. In the walls we find headers at regular intervalls. These provided a better cohesion of the wall and enabled it to resist shocks. 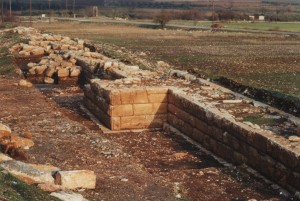 Remains of towers have been found along the entire length of the circuit wall with exception of the East wall. Along the North, West and South wall of the lower town the towers are spaced c. 40 m apart. In contrast with the rather regular intervals between the towers of the lower town in the plain, the spacing of the towers of the upper town on the hill shows more variation; these lie approximately 39 to 43 m apart. Apparently the configuration of the ground determined the positions of the towers

The dimensions of towers also vary. The front lengths of those in the lower town vary but little and come to measurements between 6.65 and 6.80 m. The length of the towers on the hill is clearly less, for instance 6.13 m in the case of the tower near the Akropolis Gate. The width of the towers show greater variation: the towers of the southern and northern walls protrude approximately 0.5 m farther than those of the western wall. Moreover, these walls are slightly wider. On the hill towers and walls are narrower. 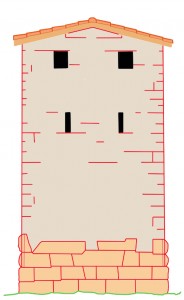